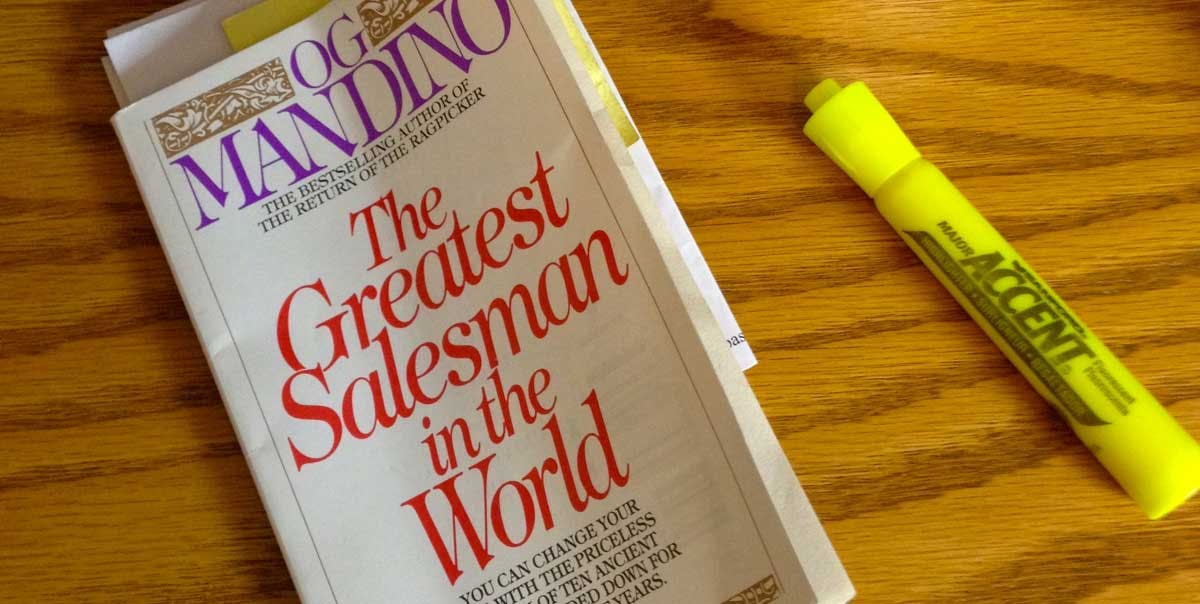 The truth in sales, as in life, can often be deceptively simple: Sometimes to look ahead, you have to look back. As in five decades back.

While it’s tempting to think that apps and gadgets alone can catapult your sales career into the stratosphere, you might also want to consider as another effective tool a book that debuted 45 years ago, The Greatest Salesman in the World.

The Greatest Salesman in the World

First published in 1968, Salesman is one of those books that never should’ve made it to the list of all-time greats. Its author, Og Mandino, was an insurance salesman and an unknown writer; this tome was his first. It’s set in the Holy Land some 2000 years ago, not exactly the most exciting locale a neophyte author can pick. And if you follow Mandino’s prescription for reading the “Ten Scrolls”  within the book, it will take you about 10 months – a snail’s pace for a volume that’s only 110 pages long.

And yet, Christian Science Monitor books and culture writer Molly Driscoll didn’t hesitate to put Salesman on her list of the 10 best self-help books of all time. Driscoll told me that as she researched her 2012 article, she kept coming upon enthusiastic testimonials about careers and lives changed by Mandino’s effort. Even actor Matthew McConaughey, in this Austin Chronicle piece, talks about how the book propelled his film career more than any other.

“It was oblivious that this book had a huge impact on so many readers, and it’s still having a huge impact,” Driscoll said. “The format is so interesting, it really appeals to people.”

The clever conceit of Mandino’s book is that you don’t read it passively, but experience it actively. It concerns a young man named Hafid, who wants to learn the secrets of a successful trader who is dying. Those secrets rest in the Ten Scrolls, but the mysterious parchments instruct Hafid (and you, as the reader) to review them morning, noon and night for 30 consecutive days, without skipping a word.

It’s at that point that the book becomes not just a story, but rather a program you follow to supercharge your attitudes and thinking. The scroll themes say it all: “I will greet this day with love in my heart,” “I will live this day as if it were my last,” “I will multiply my value a hundredfold.”

Like McConaughey, I read “The Greatest Salesman in the World” at a key juncture. I was stuck in my awkward post-college years, waiting tables and unable to zero in on any future career prospects. That was in the mid-1980s; at that point my father, a career salesman and sales trainer, recommended the book to me. After completing Mandino’s work, I embarked on a path I couldn’t have envisioned before encountering the scrolls. I sold my work successfully to several major news organizations and indeed “multiplied my value a hundredfold.” For the next 20 years.

Does Mandino’s book maintain its relevance in today’s fever-pitch sales culture? Driscoll isn’t alone in arguing a strong affirmative. Thomas Corley, the president of Cerefice and Company CPAs, in Rahway, N.J., was working on his own book Rich Habits (available through his Rich Habits Institute) when a friend sent him a copy of Salesman.

He read the book and was floored. “I trashed my manuscript and used Og Mandino’s book as my template,” Corley said. “I’ve since read every book he has written.”

Of course, there are many things Mandino didn’t address, technique being one of them. “The Greatest Salesman in the World is best for being motivational and directional,” Corley said, “but it doesn’t tell you specifically what you should do to increase sales. It provides a broad roadmap on achieving success in life. They help salespeople focus on the important things. They narrow what you need to focus on to succeed.”