A Morning of Sales Training with Jack Daly

My new friend, fellow Boston-based entrepreneur and Babson alum David Hauser from Grasshopper mentioned this guy Jack Daly to me. “You should check him out. I’m active in EO, the organization that’s bringing him to Boston.” Ok. Why not? $75 and two hours. Maybe I’ll meet some interesting people beforehand. 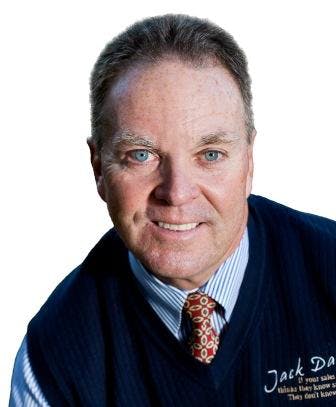 For those of you who have been to sales training before, Jack does not give sales training. By that I mean, he doesn’t do Powerpoint. He doesn’t talk about the 5 Ps or the 3 objections or the 5 things to say when your prospect doesn’t want to buy. Jack is, I am very happy to report, the real deal.

He started, grew and sold sales-focused companies across several industries, with his biggest hits coming from the financial services industry. He ran sales organizations of up to 2,400 reps. He was the co-owner of a Inc. #10 fastest growing company and Entrepreneur of the Year from Ernst & Young. He now works with clients worldwide on culture, sales management and sales effectiveness.

But, as you might imagine, Jack is more than his bio. He is fiercely competitive, but instead of competing as head of a business, he’s competing on behalf of his clients. He is trying to move businesses into high growth modes. And he’s competing with himself: he is constantly measuring the satisfaction rates of the people he speaks to, and striving to do better.

One example – he hands out workbooks at the beginning of the session and recommends that you take notes in them. Research shows that if you write something down while you listen to it, you retain more information. No one requires Jack to take this step. He could be at home in San Clemente instead of in Boston. And even if he wanted to be in Boston, he could easily coast on his bio, show some slides, and be done. No, Jack Daly wants to teach. He wants everyone in the audience to learn and implement his ideas. And he wants his audience to succeed.

and there was much more – all of it detailed, all of it based on experience and insight, and all of it delivered with an actionable, inspirational approach. The quotes above might sound trite, but, as I said before, Jack Daly is the real deal.

If you are building a business or selling something for money, I highly recommend you meet with this guy and learn all you can.