The Science of Selling Yourself: 3 Nonverbal Ways to Gain Trust 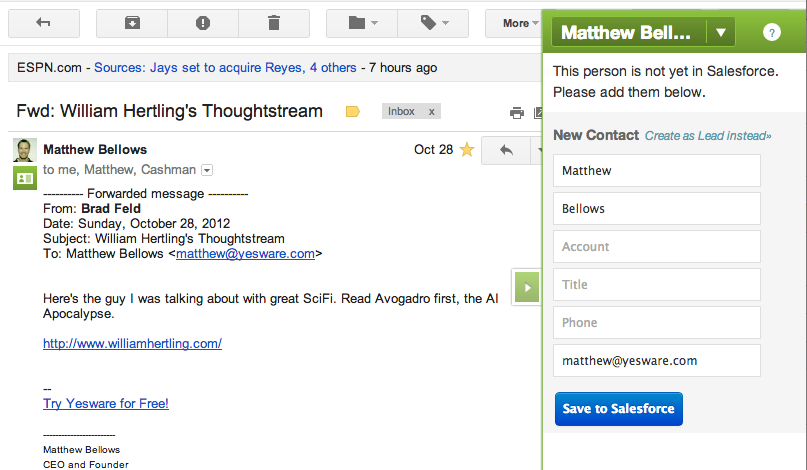 Your parents nagged you about slouching. Your career counselor told you to look the interviewer in the eye. And your colleague insisted that it wasn’t exactly what you said, but how you said it. Negative tendencies disrupt how to gain trust.

Turns out, they were all right.

Scientific studies confirm that body language is all-important when it comes to making first impressions, forming new relationships, and maintaining existing relationships — three things we do every day.

The 7%-38%-55% rule, postulated by psychologist Albert Mehrabian, points to three elements that inform first impressions (when we’re deciding whether we like or dislike someone):

Whether you’re starting a new job or heading to a parent-teacher conference, understanding the social science behind 93% of your message is an essential first step to building relationships and knowing how to gain trust. Why is trust so important? Amy Cuddy, social psychologist and celebrated TED talker, summed it up well in a recent interview:

Trust is the conduit for influence; it’s the medium through which ideas travel. If they don’t trust you, your ideas are just dead in the water. If they trust you, they’re open and they can hear what you’re offering. Having the best idea is worth nothing if people don’t trust you.

Here are three ways you can harness the power of nonverbal communication to build better relationships and continue to learn how to gain trust.

Why is it that we sometimes meet people and feel as though they’re untrustworthy? It’s the same reason video calls can be awkward. You’re (literally) not seeing eye-to-eye.

Numerous studies show that the more people look at each other, the more they like each other. Michael Argyle, an influential 20th-century social psychologist, found that we maintain eye contact 40-60% of the time we’re talking to someone. But we become seemingly much more attentive when we become the listener, maintaining eye contact with the speaker 80% of the time they have the floor. 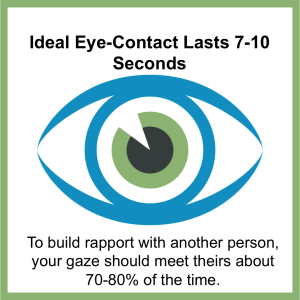 What it means: To build rapport and gain trust with another person, your gaze should meet theirs about 70-80% of the time. This lays the groundwork of how to gain trust by showing that a) you’re listening to what they have to say and b) you like them. Research also shows that:

However, there’s one small caveat to keep in mind during the first 20 seconds you meet someone. According to body language experts Allan & Barbara Pease:

Many people are taught that, in a sales meeting or job interview, you should maintain strong eye contact with the other person and keep it up until you are seated. This creates problems for both the interviewer and the interviewee because it’s contrary to the process we like to go through when we meet someone new.

The authors explain that when we first meet someone, our most basic instinct is to take mental stock of their appearance and how they present themselves. Maintaining eye contact during the first 20 seconds of a first-time interaction restricts this process.

The proposed solution: Say hi, shake hands, and then give them 2-3 seconds of uninterrupted time to look you over.

Look down to open your briefcase or folder, or to arrange any papers you might need, turn to hang up your coat, or move your chair in closer, and then look up. In filming sales [meetings], we found that not only did the [meetings] feel better for the salespeople who used this strategy, it added up to a better outcome in sales results.

2. How To Gain Trust: Mirror Behaviors 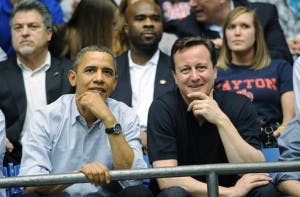 When people are engaged in a conversation — and it’s going well — it’s common to see them subtly imitate each other’s body language. This could mean assuming a similar posture, stance, series of gestures, facial expression, etc. Why? Matching nonverbal behaviors creates the sense that people are on the same page and conveys feelings of trust and empathy.

In a recent experiment, researcher William Maddux tested the impact of this behavior on business negotiations. One portion of the MBA student volunteers were instructed to subtly mirror their partner (e.g. put their elbow on the table if the other person does), while the other half were told not to mirror. The results showed that when one student was instructed to mirror the other, the two parties reached a deal 67% of the time. But when they were told not to mirror, only 12.5% reached a deal.

What it means: You can intentionally create rapport and gain trust with another person by simply mirroring their body language. If they’re leaning forward, lean in. If they’re gesturing with their hands to convey an idea, try it yourself. Just don’t go overboard — there’s a fine line between psychological similarity and just plain weird.

3. Use Your Voice To Your Advantage

Recent research by Quantified Impressions offers some useful insights into how voice influences perception. In an analysis of 120 executive speeches, the communications analytics company found that the sound of a speaker’s voice matters twice as much as the message itself. The Wall Street Journal reports:

What it means: It’s not what you say, it’s how you say it. How to gain trust relies on your awareness of the vocal nonverbal clues you’re sending. A few tips to keep in mind the next time you hop on a call:

How to Set Up a Winning Sales Enablement Program