Innovation is finally coming to email! After decades of status quo, huge companies and scrappy startups are improving on the most used communications software in the world. Here’s the first of a series of posts on the the major email innovators, what makes them interesting, and why they might work for you.

If you are one of the 170 million GMail users worldwide, you already have a new Inbox, called “Priority”. I wrote about it when it first came out but it’s already been tweaked and adjusted to make it more usable. The most useful recent change is the ability to customize your sections.

Out of the box, Priority Inbox has three sections. Google has recently added several customization options here. You can now add new sections. I added my “Follow Up” label to the Priority Inbox, so I still get the automated filtering that Priority Inbox provides, but emails I’ve marked as “Follow up” are pulled out of the “Everything Else”bucket and highlighted for me.

I also really like their changes to Archiving, so it’s much easier to auto Archive messages. GMail folks talk about a couple of other tweaks here.

P.S. The HTML5 GMail game Galactic Inbox is lame. Justin Hall’s Ideas about PMOG’s and email as a game are still very interesting to consider.

There are still several problems with GMail (I really wish I could filter by date for one), but Priority Inbox makes it a much more useful tool.

Rapportive is a GMail/browser plugin that has been heavily influenced by the Outlook plugin Xobni (see below). The install process for Firefox is ok (yes, it does require a browser restart). Then you have to find the Rapportive link, log in and give the app access to GMail. 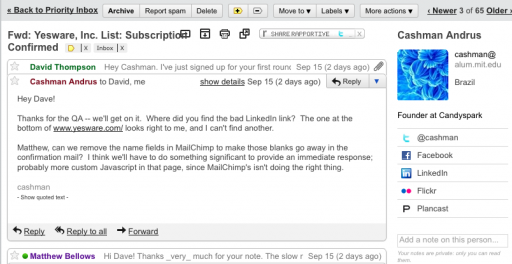 There are two major features that Rapportive adds to Gmail: Automatic Research and Notes.

With the plugin running, you get information about the recipient pulled from various social networks. I’ve had mixed results with this feature – Rapportive can’t find information on many of the people I’m communicating with. Even when it works, sometimes it’s not helpful… I usually already know the LinkedIn/Twitter/Flickr etc. page of the person I’m writing with, or I can easily find it. It would be better if Rapportive would import the tweets/LinkedIn updates etc. right into their sidebar, so my friend’s latest thoughts are right in front of me as I write to him.

Rapportive Notes, however, are a nice useful feature. It’s a simple idea, not unique to Rapportive, and not as graphically sexy as links to social networks, but it’s extremely helpful to have an easily accessible place to jot down notes about the person I’m writing to. No matter when I’m writing to that person, if I’m running Rapportive, I’ll have my notes right there.

Here’s another GMail/browser plugin that attempts to “Turn Email into Actions” in the Getting Things Done meaning of the word. Formally called “GTDInbox”, this plugin install process is more in-your-face than Rapportive  and the system is more ambitious but Active Inbox essentially adds a new set of labels drawn from the GTD methodology into your GMail interface. 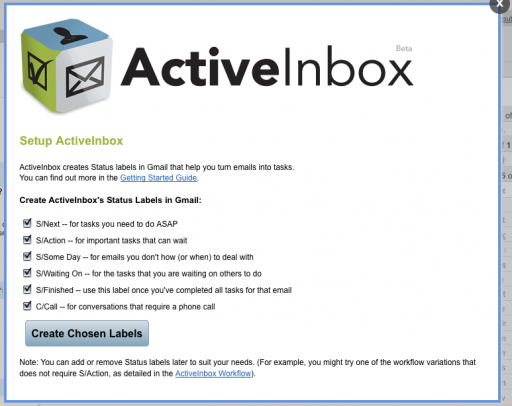 By moving through your inbox, labeling all your messages, and then Archiving them, you can actually get that wonderful feeling of Inbox Zero without too much worry that you are missing something important. I’m a big fan of GTD, and I know how hard GTD is to implement within an email world, so Active Inbox is a great tool to bridge this gap. If you use GMail and don’t mind climbing a bit of a learning curve, definitely check out Active Inbox.

P.S. At this moment, Rapportive and Active Inbox don’t play nice together. It’s really one or the other.

Third in our list of GMail augmentors is Mailbrowser. Unlike Active Inbox or Rapportive, Mailbrowser is an actual OSX (10.5 and above) and Windows app. Judging by its intro video, Mailbrowser’s specialties are contact management and file access. By synching with GMail through IMAP and making local copies of all your contacts and attachments, it augments the standard GMail features here significantly. While Webyog plans more Xobni-like social network features, their main focus now seems to be on bug fixes and expanding browser support. Mailbrowser currently works with Firefox, IE and Chrome.

Unfortunately, I had a big problem with the Terms of Use (the developer, Webyog, is the only one who can terminate the license), so I didn’t experience Mailbrowser first hand.

One of the first startups to try to innovate on email, and by far the most imitated, Xobni takes the plugin approach, but with Microsoft’s Outlook. The company started by tracking and displaying statistics about who you emailed the most (a feature that Mailbrowser has adopted) but hit it’s stride by pulling information from the web about the people you are in touch with. Outlook 2010, Rapportive and our upcoming app Yesware are all trying to flatter Xobni with their implementation of this feature.

While the web-lookup features are sexy, Xobni’s biggest benefit to users is vastly improved email ordering and search functionality. Even Outlook 2010 continues to store all of your personal emails in a massive “Sent” folder, instead of with the received mail from that person. By my estimation, the 5+ million Xobni downloaders have saved trillions of hours combined by not having to root through “Sent” to review what they last wrote to someone.

The main knock against Xobni is the additional load that the service places on Outlook. Already prone to bogging down with users who hoard email, Outlook can run even slower with Xobni attached. Several Outlook power users I’ve talked with tried to use Xobni for it’s powerful features, but had to uninstall it because it made Outlook too slow. But if you are still trapped in Outlook, you owe it to yourself to try Xobni. 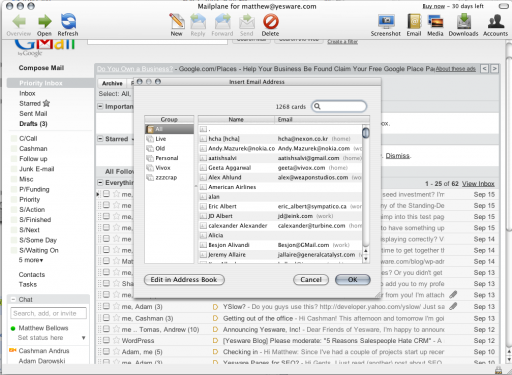 Mailplane supports OSX 10.4 and up. Rapportive has a plugin for Mailplane, so at least in this case, two email innovators are playing nicely together. The labels from Active Inbox do appear in Mailplane, but their nice action bar does not.

Unfortunately, Mailplane doesn’t help at all with offline email – generally the best reason to use a client. I’ve also experienced some lag issues as the app is talking to GMail. Even so, if you use GMail on a Mac, there is every reason to use Mailplane on your desktop.

P.S. Another way to get GMail running in its own process on your Mac is Fluid, but it only supports OSX 10.5 and up, and I’ve had trouble installing it on Snow Leopard.

Next time, I’ll cover Gist and several other innovative email services, plus I’ll talk about the features we’re building for Yesware. If you want your favorite included in the roundup, please leave a comment below.

Just a Reminder: How to Write a Reminder Email (Templates)

How to Track Email Attachments