How To Sell #1: Brett Ottolenghi

Brett comes from mushroom people. Before he was even born, his dad was harvesting chanterelles, morels and shiitakes from the Pennsylvania woods.  At 12 years old, he launched himself into the food import business after ordering pasta with truffle oil. In second grade he was dealing Pixy Stix and lollipops in school. So you could safely say Brett has both food and selling in his blood.

Brett now runs Artisanal Foods, one of the biggest suppliers of gourmet-quality foods to restaurants in Las Vegas.  He counts as his customers the biggest chefs at the most exclusive restaurants in the best food town in the country. He was recently profiled in The New Yorker, where most of the details of this post come.

But despite his achievements and moderate fame, he’s still a sales guy on front lines. In this post, the first in a series on individual salespeople, I look at individual sales personalities, tactics, strengths and obstacles to  extract sales lessons that we can all benefit from.

Love What You Do

Brett is luckier than most. He found something he loved to do at a very early age. Since his parents were into mushroom harvesting on the side (his dad sold sandpaper most of the time), they had a bit of  knowledge and a few contacts to help him get started.  But even if it takes you longer than Brett to find the thing you love to sell, keep looking until you find it. There is absolutely no substitute for the passion that selling what you love brings.

I’m not saying that finding that passion is easy. You have to be creative. Sometimes (in my case for example) you might have to create your own products instead of selling someone else’s. You can lie awake at night saying “Why do I sell ads? I hate ads.” or you can think “I’m representing a pretty cool, unique audience reading decent content.”

If you don’t feel that way about your product, dig deeper into it, go talk to customers who love it. Go talk to the creative people who make it. Discover that inspiration again.  You could be facing the 34th cold call of the day thinking “I despise this crappy cable service I’m pitching” but…

Ok then maybe it’s time to look for a new job selling something you do genuinely love.

Go Where the Money Is

Brett grew up in Pennsylvania, bounced around high schools in the east, and then moved out to Las Vegas for college in 2004. Vegas had already become one of the best cities in the world for restaurants. Wolfgang Puck opened his second Spago in Vegas in 1992. He was followed by Sirio Maccioni, Michael Mina, Julian Serrano, Todd English, Jean-George Vongerichten, and many others in the late ’90s. So Brett, selling truffles out of his dorm room and on  TruffleMarket.com,  was headed into the best possible territory for selling his products. His customers were competing with each other for the purest, most authentic and flavorful ingredients, and Brett was going to supply them.

But “Go Where the Money Is” doesn’t just mean move or travel to your customers. There’s not a salesperson in the world that needs to be told to get in the car or get on the plane. It also means ruthlessly pare back your pipeline. Be brutally honest with yourself about every new prospect. In the world of Transparent Pipelines, there’s a temptation to stuff your prospect list full. That’s counterproductive. It wastes your time and raises expectations from the rest of your team. Brett doesn’t spend time at the buffet kitchens or the greasy spoons, even if they have aspirations of grandeur. He’s looking for chefs who not only have the right ambition, but have the pocketbook to back it up.

Educate While You Sell

Brett is an expert in the ingredients he sells, and he tries to share that knowledge with his customers. He travels the world to find the most authentic sources for ingredients. He can give his customers a quick test to determine fake saffron or knock off black truffles.  And he cultivates the image of a slightly nutty professor. Where his competition wears matching butter-yellow shirt and shoes, or trademarks their overall/bowtie combination, 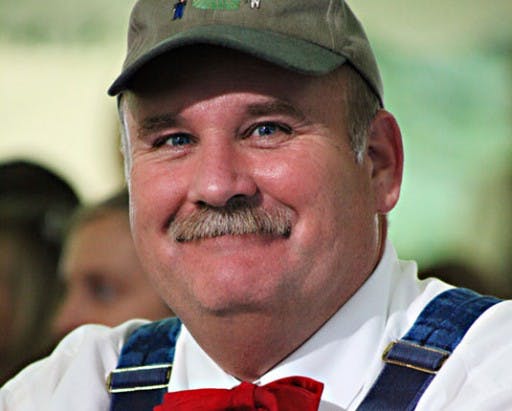 Farmer Lee in his trademarked outfit

Brett wears unfashionable brown suits, brown shoes and fake glasses. “It’s a very specific look” he says, “almost professorial.” And it’s not only for chefs. His blog is a vast resource for information on food, cooking and ingredients.

Educating instead of selling requires one of two things – that you actually know what you are talking about, or that you have stupid customers. I’m not going to talk about stupid customers, because in general, they don’t have much money. So you’ve got to either be a real expert, or get yourself to be one, before you can really sell. One of the main reasons I like selling cutting-edge technology is that most people don’t know much about it. It’s comparatively easy to become an expert. Try to get me to sell something relatively common or well understood? It would take me much longer to get rolling.

Teaching something is the best way to learn it. If you are a new salesperson, the first thing you need to do is learn your product. To test yourself, organize a class for your friends, co-workers, boss, in the product. Call it “Here’s What I Know” and talk through the intricacies of the thing you will be selling. Here’s one such presentation. It worked well enough that I ended up presenting it at two industry conferences!

Earning a new customer in the Las Vegas food scene is tough. Relationships tend to last for years and are worth hundreds of thousands of dollars. Payoffs and kickbacks are not uncommon, but loyalty is the thing that keeps supplier/vendor relationships tight. Brett was trying to break into Masa with a new shipment of duck breasts and fois gras. “We use Hudson. That’s what Chef Masa likes best. When he finds something he likes, it’s very difficult to get him to use other things.” said the executive chef of the restaurant. Brett persevered with excellent product, persistence, patience and personality. And it couldn’t of hurt that Brett also brought with him Helena Gonzalez, a beautiful 27 year old whose parents make the fois gras Brett is selling. He has brought other sales support, including a live sturgeon in a tank when he sells caviar. “I know what a sturgeon is!” said Alessandro Stratta, “Next time he’ll bring a pig!”  But Stratta placed an order for the caviar.

It’s something we can all learn from – sometimes you have to make a little show. Brett’s guests were in keeping with his overall persona. He was seeking to educate his customers. But who can turn down a vendor waiting outside with a four foot long sturgeon?

Those are four lessons I drew from Brett Ottolenghi’s sales career: Do what you love, Go where the money is, Educate while you sell, and Work it. Which can you put to work for your career?

If you want to recommend a great salesperson to be profiled on this site, email me at matthew [at] yesware [dot] com or post a comment below.