Music That Gets Salespeople Pumped 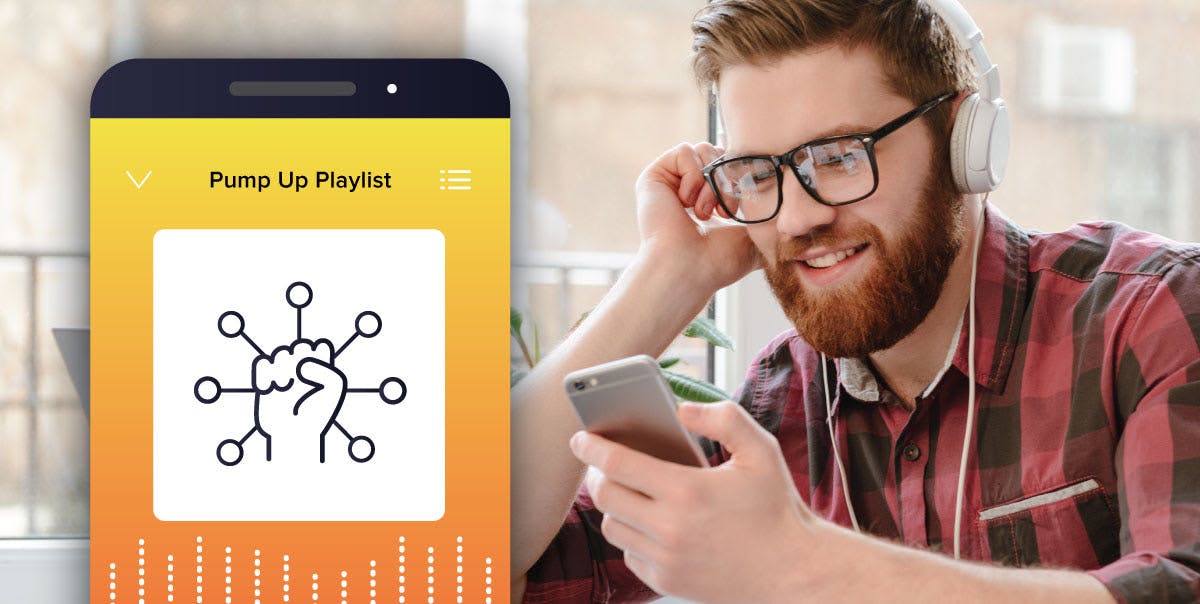 The right pump-up songs make you feel like the hero of your own story.

Whether you’re getting in the zone to work out, to kick ass at a work presentation, or to simply clean the house, you can use pump-up songs to motivate and inspire you.

For salespeople, listen to these songs before an important sales meeting, a batch of cold calls, a sales presentation, or even just when you need that extra nudge of motivation.

Keep reading to see the science behind the music, plus a Spotify playlist to take for yourself.

The Best Pump Up Songs Playlist

While musical preference varies from person to person, this playlist (backed by science) is designed to bring you extra energy to any task you need to accomplish:

All About That Bass: Why High-Power Music Are the Best Pump Up Songs

If you walk around wearing headphones (like me), you know there are particular hype songs that make you feel like you could take over the world.

The sound of the bass combined with my feet hitting the sidewalk make me feel like the protagonist of a movie where, in the final scene, I win.

As part of a research experiment, people were put into two groups. One listened to a high-power playlist (heavy bass), while the other listened to songs considered low-power.

Then, they were shown word fragments like “P _ _ E R” and asked to fill in the blanks.

Those listening to the high-power playlist were more likely to complete the fragment as “POWER” while the low-power group would settle for something more passive (e.g. PAPER).

Here are five bass-heavy songs that’ll give you the power you need:

Artist: M.I.A.
Album: Matangi
Why it works: No one is more badass than M.I.A. Whether you’re on a run or psyching yourself up to speak in a big meeting, “Bad Girls” takes you where you need to be.

Artist: David Guetta (ft. Sia)
Album: Nothing But the Beat
Why it’ll pump you up: A double whammy — this song has a great beat and inspirational lyrics. Play it loud as you think about how you’re stronger than anything that could potentially bring you down. Be unapologetically you.

Artist: Ariana Grande ft. Zedd
Album: My Everything
Why it’s a pump-up jam: Struggle makes us stronger; this song is about that moment of clarity that comes after every disappointment. Use it as a source of motivation when you’re ready to defy the odds and go above and beyond expectations.

Artist: Kanye West
Album: 808s & Heartbreak
Why it works: Kanye West is the king of confidence. He once said his biggest regret in life was that he’d never be able to see himself perform live. Remind yourself how truly amazing you are, and pump up the volume on this one.

Artist: 2 Unlimited
Album: Get Ready For This
Why it’ll pump you up: I couldn’t bring myself to skip this song. It might be the most famous of pump-up songs. It’s used before sporting events, in the movie Space Jam, and a hilarious cheerleading routine in Bring It On. Play it and you’ll be ready for anything.

I Am Not Throwing Away My Shot: The Importance of Motivational Music

In a research experiment, subjects walked on a treadmill to exhaustion (a heart rate of 199 beats per measure) listening to either 1.) Motivational music (in this case, pop or rock), 2.) neutral music, or 3.) no music at all.

Results showed that participants who listened to motivational music had a 15% increase in treadmill endurance over those listening to no-music and a 6% increase over neutral music.

These motivational songs will give you the extra endurance you need.

Artist: The Roots featuring Busta Rhymes, Joell Ortiz, & Nate Ruess
Album: The Hamilton Mixtape
Why it’s a pump-up song: When you’re faced with a challenge, you need to “rise up” and act. This song will make you feel powerful as if you can accomplish anything. The lesson? No matter what adversity you’re facing, do not throw away your shot.

Get motivatedSchedule your next sales meeting without the back-and-forth

Artist: Barbra Streisand
Album: Funny Girl
Why it works: Show tunes aren’t everyone’s forte, but they are motivational. Whether things are going your way or not, this song encompasses how it feels to be confident and move in the direction of your dreams.

Artist: Hamilton Leithauser
Album: I Had a Dream That You Were Mine
Why it’ll pump you up: Passion. This song is driven by exceptional passion. Sometimes when you want something, it comes with a little anguish. Even if your dreams aren’t reality just yet, keep pushing.

Artist: Idina Menzel and Kristin Chenoweth
Album: Wicked Original Broadway Cast
Why it’ll pump you up: It takes place at a pivotal moment in the music, when Elphaba (the Wicked Witch of the West) decides she has to forge her own path and play by her own rules to succeed. The message of this song is to be strong, resilient, and stay true to yourself.

Don’t Stop Me Now: The 3 Ingredients For Uplifting Music/Hype Songs

Music has the power to lift your spirits.

Getting in the zone to accomplish a task requires getting into a positive mindset.

In a 2015 study, cognitive neuroscientist Dr. Jacob Jolij assembled a list of 10 of the most uplifting songs ever.

The hype songs were assessed according to the following criteria:

Combining the three ingredients create the formula for a “feel-good” song.

We’ve included a few of these feel-good songs in our list:

Artist: Queen
Album: Jazz
Why it’s a pump-up jam: An alternative to the overplayed “We Are The Champions,” this song is also about motivation and being on top of the world, not letting other people bring you down.

Artist: Billy Joel
Album: An Innocent Man
Why it’ll pump you up: Upbeat tempo + positive lyrics = feel-good music. Plus the protagonist’s optimism and devotion will put you in the mindset to keep moving.

Artist: Gloria Gaynor
Album: Love Tracks
Why it’ll pump you up: This one is self-explanatory: you can come out of any situation stronger than you previously were.

The right hype songs can take you from 0 to 100. Tweet us your favorite pump-up songs @Yesware.